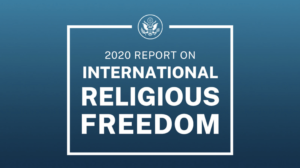 As this year’s report shows, 2020 witnessed significant government restrictions on religious practice, as well as societal intolerance of, and violence against, individuals on account of their religious beliefs. Anti-Semitism, anti-Muslim hatred, and other forms of bigotry continued to rise, with four out of every five people in the world living in countries with high or very high restrictions on religious freedom.

Learn more about the 2020 Report on International Religious Freedom here.