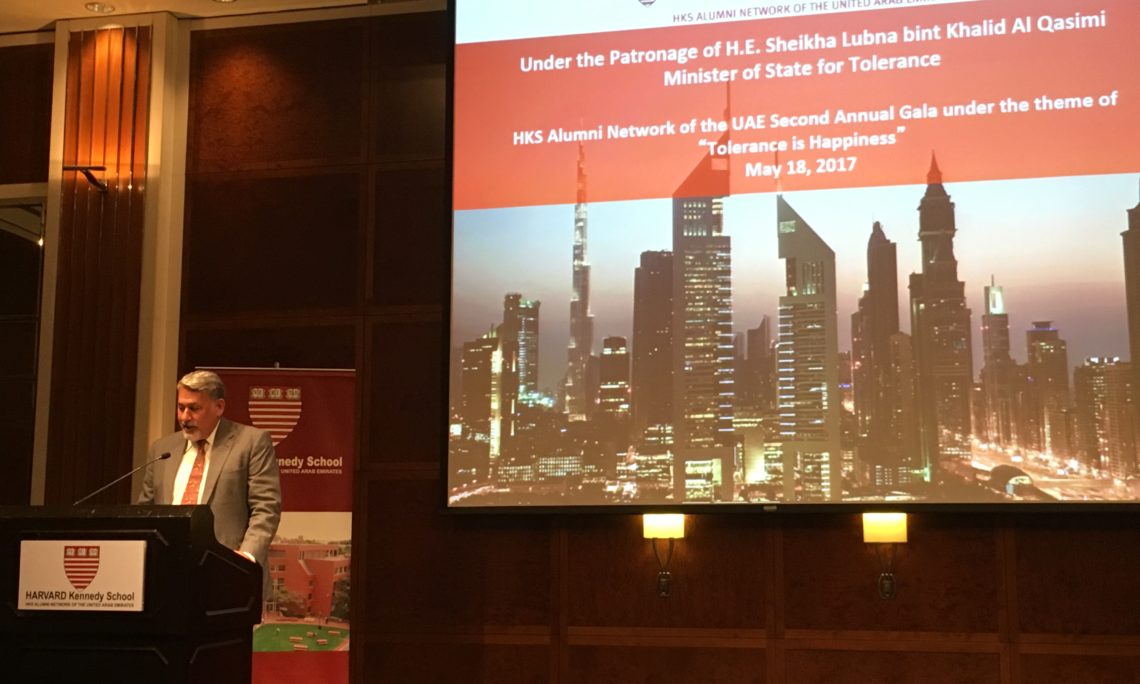 U.S. Consul General Paul Malik spoke about the importance of tolerance at the Harvard Kennedy School Alumni Network of the UAE’s second annual gala dinner on May 18 in Dubai. Please see his full remarks (as prepared for delivery) below.

Your excellency, Sheikha Lubna, ladies and gentleman, friends – good evening. I am very pleased to be here.

I would like to thank the Harvard Kennedy School Alumni Network of the UAE for hosting us this evening, and for focusing our attention on the important themes of tolerance and happiness.

We owe a special thank you to Her Excellency, Sheikha Lubna, the UAE’s first Minister of Tolerance, both for her inspiring words and for her important work promoting the UAE’s culture of coexistence, diversity and respect.

In fact, I think it’s fair to say the UAE has emerged as a world leader because of its commitment to tolerance, enjoyed by the extremely diverse population living and working in the UAE. Thanks to the visionary leadership of the UAE’s rulers, Arab youth across the region—for the sixth year in a row—chose the UAE as the model country they would most like their nations to emulate, followed by the United States in second place.

That shared cultural understanding between the United States and the United Arab Emirates is special, and it finds a special expression in the role of the Harvard Kennedy School here in the UAE. In 2014, the UAE Government gave $15 million to establish the Emirates Leadership Initiative. The gift enabled fellowships for up to ten exceptional students from the Arab world to study at Harvard Kennedy School. It also enabled a major research initiative focused on the Middle East. And, it made possible executive education programs for senior officials from the region, and an interactive field visit to the UAE by Harvard Kennedy School students. That’s the power of collaboration.

Not many people know this, but I have been a part of the diversity of this region for most of my life. My father was born in Egypt and later became an American diplomat in the U.S. Foreign Service. He married my Irish-American mother and raised us in a series of countries, mostly in the Middle East. I consider myself fortunate to have been exposed to these multiple perspectives from an early age, studying with international classmates from all over the world.

After growing up in the region, I attended university in the United States. While I confess that at times I felt a stranger in my own country, I always felt at home in the diversity of the college campus. The United States was founded on principles of tolerance and inclusion for religious minorities, and nowhere is diversity stronger than in our world class system of higher education. Last year – I’m proud to say – almost 3000 Emirati students studied in the United States — someone in each of our 50 states, acting as ambassadors for the UAE and teaching their fellow students about new religions, cultures, and peoples. And I know, as alumni of the Harvard Kennedy School, one of the most diverse and dynamic higher education institutions worldwide, you have a personal understanding of how a diverse student body contributes to a well-rounded education.

After university, I eventually followed in my father’s footsteps and joined the U.S. Foreign Service, an institution that today also prides itself on celebrating diversity. We endeavor to create a Foreign Service that reflects the great diversity of our country. But it wasn’t always that way. During my father’s time, we were accurately described as “pale, male, and Yale” – well, maybe a few Harvard grads sneaked in. Essentially, American diplomacy was an Ivy-League institution. But, my father was an outlier – foreign-born and a graduate of the American University in Cairo, he was the first Fulbright student from Egypt in 1949 and took his MBA from New York University. And, I would have to say that he not only broke traditional barriers, but also contributed to his American colleagues’ better understanding of the Middle East.

While women have served as U.S. diplomats since 1922, until 1972 they were forced to resign after marriage. We continue to improve, however. Women now outnumber men in most incoming Foreign Service classes, and current recruitment practices focus on encouraging talented members of minority groups to pursue careers in diplomacy. It makes us better listeners, better problem solvers, and better representatives of the diversity of U.S. society.

From personal experience, I know that tolerance and diversity are force-multipliers that make you and any organization stronger, smarter and more resilient. And, the same can be said of countries: Neither the UAE nor the United States would be the countries we are today without our common commitment to diversity and acceptance of those with different backgrounds, views and beliefs.

As the experience of our country shows, ensuring tolerance and promoting acceptance is a flame that has to be tended. President Kennedy once said, “Tolerance implies no lack of commitment to one’s own beliefs. Rather, it condemns the oppression or persecution of others.” And, in fact, President Kennedy’s own candidacy was controversial at the time, as many voters were skeptical of him, thinking that his Catholicism would make him beholden to the Pope. A diverse society is a dynamic work in progress, aiming to improve, and reaching to the future. As we work to embrace diversity and encourage tolerance, we are also learning and growing, becoming more self-fulfilled and self-aware, which also leads to happier lives.

Dubai has challenged itself to become the world’s happiest city. With the important work of the Minister of Tolerance, promoting practices that will make the UAE smarter, stronger, and a model for the region and the world, I have no doubt Dubai is on track to achieve its goal.

Thank you again to our hosts for bringing this extremely diverse group of people together here this evening. Harvard Kennedy School should be proud – and happy – about the diversity and tolerance that it has fostered.