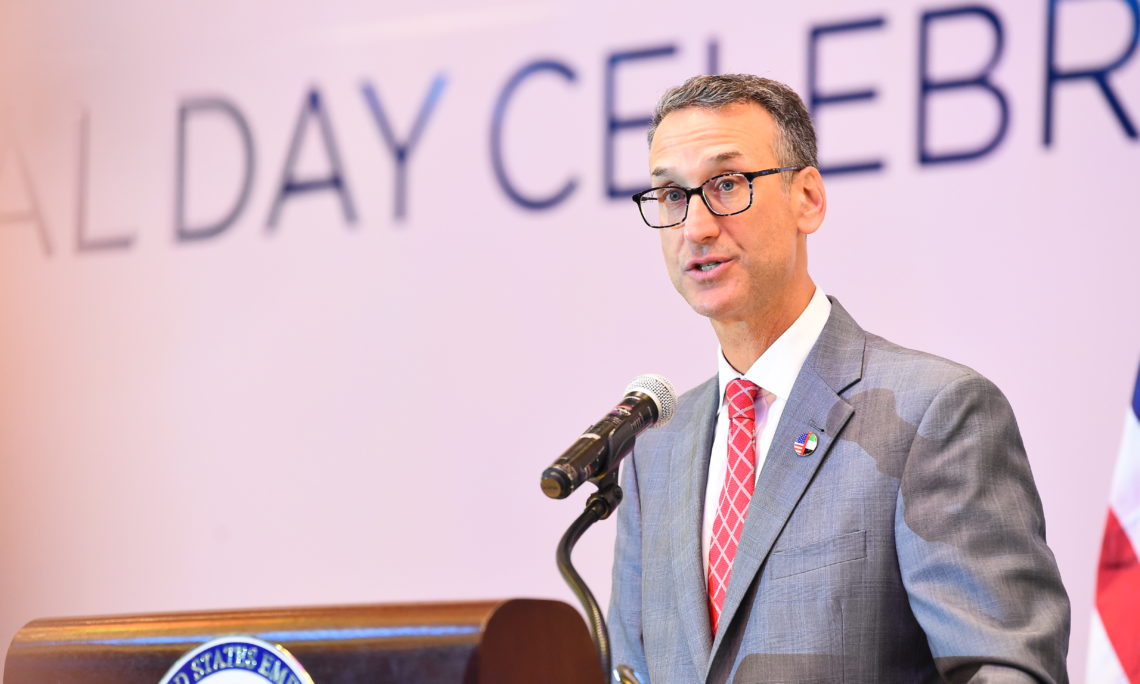 “In ancient Rome, the gladiators went into the arena with these words on their lips: ‘Let me win. But if I cannot win, let me be brave in the attempt.’”

With those words, American Eunice Kennedy Shriver inaugurated the first ever Special Olympics Games in 1968. In the United States, this was a year of turmoil, but also of significant achievement. The Civil Rights Act was signed into law; the 7-47 aircraft entered service;

and Arthur Ashe and Billie Jean King both won Grand Slam events in tennis. And add to these the date of July 1968, when Mrs. Shriver brought together about 1,000 people with intellectual disabilities from 26 states and Canada to Soldier Field in the great city of Chicago. She wanted to highlight, in a very public way, the physical skills of athletes with intellectual disabilities. Her goal was to erase any stigma associated with disabilities and replace that with sport, competition, and fun. And so, on that hot July day, Mrs. Shriver opened the Games with the words that would become the Special Olympics Athlete’s Oath: “Let me win. But if I cannot win, let me be brave in the attempt.”

It is a source of great pride that this American initiative of ability, acceptance, and inclusion has spread so far. For the first time ever, the Special Olympics World Games will be held in the Middle East. A Presidential Delegation led by Second Lady Mrs. Karen Pence will represent the United States at the Games. Mrs. Pence and the other members of the delegation are showing their support, and the support of the Trump Administration, by flying halfway around the world to cheer on our athletes and to stand shoulder to shoulder with our partners in the UAE.

During this Year of Tolerance, the concept of diversity is being broadened to include all individuals, all athletes, all people of determination. This is a great testament to the shared values and partnership between the United States and the United Arab Emirates – respect for diversity, with all human beings leading lives of dignity and self-worth, and all individuals contributing to a vibrant society.

The determination of Mrs. Shriver in bringing awareness to a cause that was so dear to her cannot be overstated. As an advocate for people with intellectual disabilities, Mrs. Shriver saw how she could use sports to include everyone in physical activities – including her sister Rosemary, who had an intellectual disability. And yet, in the America of the 1950’s and ‘60’s, the options for someone like Rosemary were limited.

So Mrs. Shriver set out to expand opportunities for everyone to participate and grow through athletics. Mrs. Shriver was the sister of another renowned American: President John F. Kennedy. She pushed her brother to create a national research institute with a focus on understanding disabilities. As an advocate for people with intellectual disabilities, Mrs. Shriver sought to improve the lives of others, publicly affirming the dignity and abilities of those with special needs.

The vision of one American woman will be realized this week when over 190 countries will be represented at the World Games. It is remarkable to me that the Special Olympics’ reach has expanded to more than 5 million athletes and Unified partners. And the United Arab Emirates is a most appropriate country to host the Games – home to over 200 nationalities, exemplifying the dream of another visionary, the founder of the country, Sheikh Zayed.

As the Special Olympics flame has journeyed from the United States and Greece, and throughout the UAE, its symbol of hope has touched many in this welcoming nation who are working toward a future of inclusion, dignity, and respect for all.

As Mrs. Shriver once said, “What truly counts is the courageous spirit and the generous heart.” For the Special Olympians here with us today, you represent the perseverance and determination that is required to compete at the Olympic level in any sport. The commitment to practice and train, to be the best teammate you can be – these are all elements that showcase the best of humanity. We applaud the athletes, their families, their coaches, and all members of Team USA. To them I say: you have already won. You have been brave in your attempt, and your attempt has been a tremendous success.

We salute you, and we wish you all success in the upcoming Games.