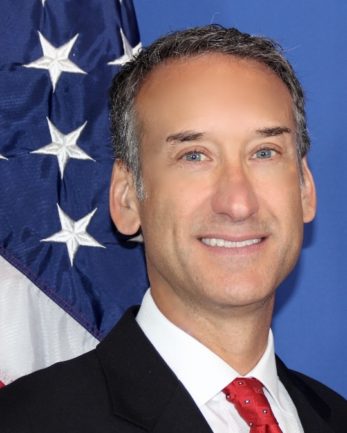 Steven C. Bondy arrived in Abu Dhabi in September 2017 as Deputy Chief of Mission. In that capacity, he is responsible for supporting the Ambassador’s policy engagement and managing internal operations of Mission UAE, including Embassy Abu Dhabi and Consulate General Dubai. Mr. Bondy served as Chargé d’Affaires, a.i., for the period March 2018 to October 2019.

Prior to arriving in the United Arab Emirates, in 2016-17, Mr. Bondy was Assistant Chief of Mission at the U.S. Embassy in Kabul, where he was one of two deputies to the Ambassador, focused on security, law enforcement, assistance, and operations. From 2013 to 2016, Mr. Bondy served as the Foreign Policy Advisor to the Commanding General of a U.S. Special Operations Command element, where he worked to ensure the Command’s plans and operations meshed with national security and other foreign policy interests. Prior to that, Mr. Bondy was the Director for Arabian Peninsula Affairs at the U.S. State Department. He also served in Baghdad, Iraq in 2009-10, where he was co-director of the Force Strategic Engagement Cell.

Throughout his career, Mr. Bondy has focused on the countries and issues of the broader Middle East region. Previous overseas assignments include tours at the U.S. embassies in Bahrain (2004-07), Egypt (2000-2004), Jordan (1994-96), and Turkey (1992-94). In Washington, he served as director for Terrorism Finance and Economic Sanctions Policy, Lebanon desk officer, and at the State Department’s 24-hour Operations Center.

Mr. Bondy is a native of New Jersey, with Bachelor’s and Master’s degrees from the University of Delaware. He speaks Arabic and French and studied Farsi, Turkish, and Spanish. Mr. Bondy and his wife Meghan are the proud parents of their adult daughter and son.