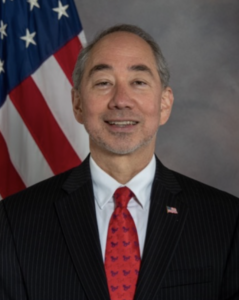 Patrick I. Tanimura is a career member of the U.S. Foreign Service. He assumed the role of Deputy Consul General in Dubai in August 2022.

His most recent overseas posting was in 2020-2021 as Director of the International Narcotics and Law Enforcement Affairs (INL) office at the U.S. Embassy in Kabul, Afghanistan, where he had been Counternarcotics Team Lead in 2017-2018. He also served as a Human Rights Officer at the U.S. Mission to International Organizations in Geneva, Switzerland, and as a Provincial Advisor in Al Hillah, Iraq. Other past assignments include consular positions in Hong Kong, Matamoros, Osaka, and Dhaka. Prior to joining the Foreign Service, he worked as a Commercial Officer for the U.S. Commercial Service in Almaty and Washington, DC, a program officer for an NGO in Central Asia, and a journalist for USA Today and The Associated Press.

Originally from Hawaii, Patrick is a recent graduate (Class of 2022) of the National Defense University’s College of International Security Affairs in Washington, DC. He has a Bachelor of Arts degree from the University of Hawaii at Manoa, double majoring in Journalism and Russian Language. He and his wife Gavhar, a native of Bukhara, Uzbekistan, have three children – a son serving in the U.S. Marine Corps, a daughter pursuing undergraduate study at the University of Texas, and a son who is entering middle school. He speaks Russian, basic Spanish, and some Japanese.