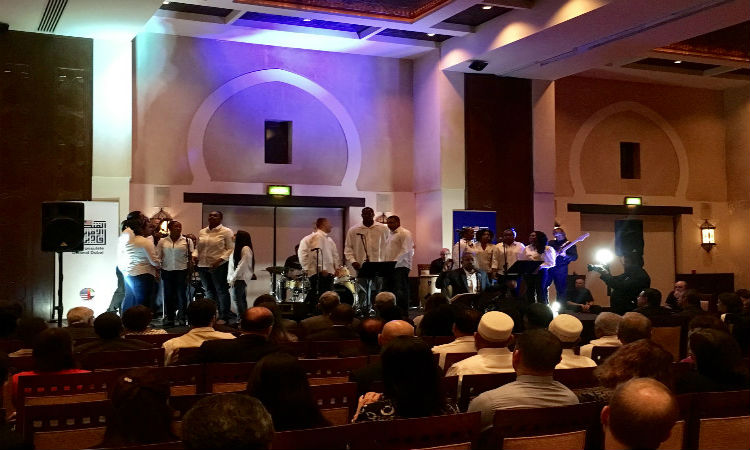 In collaboration with the Ismaili Centre, U.S. Consul General Paul Malik hosted a concert by the American “Oasis Gospel Choir” on Wednesday, May 24 at the Ismaili Centre in Dubai. Please see below for his full introductory remarks.

Ladies and gentlemen, distinguished guests, thank you for joining us this evening. It is wonderful to be back again in such a beautiful setting and to partner with the Ismaili Center for what should be a musically enchanting evening.

· Mr. Amiruddin Thanawalla, President of the Ismaili Center, for his kind introduction and for hosting us;

· And, of course, the many volunteers, led by Akbar Verjee. Without their dedication and support this event just would not have been possible. And, I’m particularly appreciative since the Ismaili Center and community was able to pull this together with very little notice.

· Finally, we could not do this without the beautiful music and voices of the American “Oasis Gospel Choir.”

When I first visited the Ismaili Center more than a year ago, I enthusiastically told its leadership how I wanted to bring an American gospel choir here to showcase our own spiritual traditions through music and song, because I thought it would mesh well with our and the Ismaili Center’s desires to celebrate diversity, tolerance, and coexistence. Well, my desire – even threat, some might say – has come to fruition tonight, I’m pleased to say. And, I’m very pleased to see so many religious figures attending, as well as the great national, cultural, and ethnic diversity in the audience.

Some of you may remember that last year, around this time, we partnered with the Ismaili Center on a concert with the group “Najmaat,” the first all-female Arabic-music quartet in the United Arab Emirates, featuring the mystical sounds of the oud, nay, qanun, and other traditional instruments. The members of Najmaat, themselves, also made the group special, comprising an American, Egyptian, Moroccan, and Russian, and showing how music transcends cultures, nationalities, and religions, and doesn’t discriminate in its appeal.

This evening, as a cultural counterpoint to Arabic music, we come together to celebrate one of America’s oldest and most cherished forms of song — gospel. A stirring musical form that crystallizes a very difficult chapter in American history, gospel speaks directly to the listener. Its “call and response” structure is distinctly inclusive and invites active participation, even if you might not know the lyrics. So, I expect to see all of you clapping your hands, tapping your feet, and swaying your heads. It is meant to get the audience to feel the music and share the deep-seated experiences of the singer – whether the tragedy of suffering, the hope for redemption, or the beliefs needed to cross that divide. At its most sublime, gospel evokes a sense of community and an experience of communal catharsis, which I always feel when I come to the beautiful Ismaili Center.

It is no secret that gospel music emerged from a dark period in American history. Some of the earliest influences are the Christian spirituals that arose during the 17th century, when much of the African American slave population was forcibly converted to Christianity. During that time, Christian ideas and ethics were one of the few themes that slaves were allowed to sing about. Over time, that evolved into a distinct form of folk music and even a distinct language, heavy with symbols and meaning.

In fact, many gospel songs extolled freedom by couching coded messages for their performers and listeners. For example, “Going Up Yonder” didn’t only suggest Heaven, but also meant leaving the southern states for the freedom of the north; “Moses” was code for Harriet Tubman, the founder of the Underground Railroad, who assisted slaves to freedom; and “Swing Low, Sweet Chariot” was a song about fleeing north by using the Underground Railroad.

The gospel tradition continued to evolve over the years and in the 20th century was influenced by jazz and blues while also staying true to its roots. These new influences saw gospel move away from being sung a cappella to incorporating rhythms that were prevalent in jazz and blues in the early 1930s and 40s. Tommy Dorsey and Mahalia Jackson were two of the foremost pioneers of that time. Many famous contemporary musicians have their roots in gospel music; you’ll recognize some of the most obivous, such as Diana Ross and Aretha Franklin, but did you know that Jessica Simpson, Katy Perry, and Usher also were inspired.

Although Christian symbols and themes remain prevalent in gospel music, it has evolved to include a broad array of themes beyond what you might find in the church or chapel. And you can now find gospel music brunches, and hear it on the radio throughout the United States. Gospel music has transcended religion and culture, making it accessible to a diverse group of listeners.

With that background, let me thank you all, once again, for joining us tonight. I hope you enjoy the music and leave with a new or renewed appreciation for a small part of our American culture.

Before I pass the microphone to the choir director, Robert Carter, I wanted to introduce him to you. Robert epitomizes the history and influence of family and religion on gospel music. His mother was in a gospel choir which means he was listening to gospel music before he was even born! And he joined a choir as soon as he could clap – and here he is, decades later, spreading the joy of music far away from his home of Indianapolis, Indiana. I know we are going to “raise the roof” tonight here at the Ismaili Center. Please put your hands together for Robert and the “American Oasis Gospel Choir.”